Ryan had a really bad day at school yesterday. First he forgot to bring his lunch and had to buy a peanut butter and jelly sandwich at the cafeteria. Then this happened: 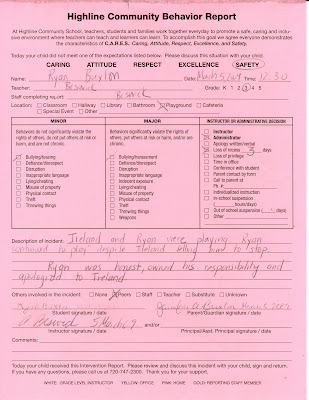 The story seems to be that Ryan, Ireland and Luisa were all playing together on the playground. The two girls decided they'd rather swing and talk. Ryan wanted them to keep playing, so he was badgering them and poking them with a stick. This really annoyed Ireland and she retaliated by biting Ryan on the back. She bit him hard and Ryan went over to the adult in charge and asked if he could go in and see the nurse.

Of course once he told the grown-ups why he wanted to see the nurse, both he and Ireland ended up getting detention. They will not be allowed to play outside with their classmates for three days.

Hopefully Ryan has learned two things--when a girl tells you to stop doing something you should stop doing it and girls bite.
Posted by Braymere at 11:40 AM

Biting is worse than badgering.

Maybe his little girlfriend is a vampire.