Way back in April of 2012, Seth sent me an email that read like this: Finnish Spitz looks exactly like your dog...  Amy found this:  http://www.petwave.com/Dogs/Dog-Breed-Center/Non-Sporting-Group/Finnish-Spitz/Personality.aspx .

I clicked on the link, and sure enough, the pictures did look a little bit like Darcy. 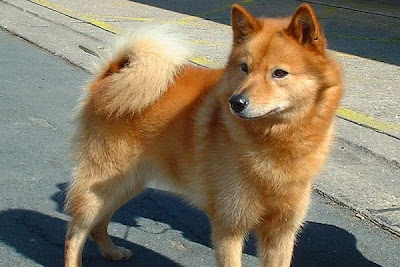 Since I wasn't familiar with the Finnish Spitz breed, I went back to the main page and read all the information.  None of it described Darcy exactly, at least not until I got to the Behavioral Traits section.  That read: In Finland, this breed is called the “Barking Bird Dog” and they got this nickname for one reason: they bark, and bark often. The Finnish Spitz can bark up to 160 times per minute. This makes them excellent hunting companions, but can drive an entire neighborhood crazy.

"Wow," I thought.  "That explains everything."

I shared the information with Seth, and he immediately decided that Darcy was, in fact, a purebred Finnish Spitz. 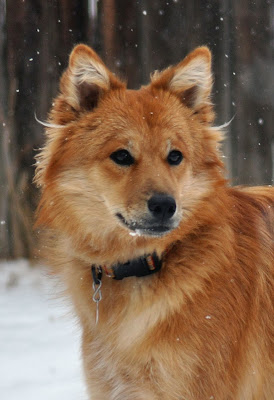 Yesterday, James and I took Darcy and Emma to the dog park at Cherry Creek State Park.  We followed the trail from the parking lot to the stream and paused for a few minutes to let the dogs get wet.  This is probably the busiest area in the entire dog park, and predictably, Darcy responded to the chaos with a whole lot of barking.

I went to her, in hopes of getting her to settle down.  While I was holding her, a man came up to me and asked if she was a Finnish Spitz.

"My husband thinks she is," I said, "but we got her from the Dumb Friends League so it seems kind of unlikely."

"You never know," he responded.  "She sounds like one, plus she's the right size and color and she's got the Spitz coat."

He seemed to know a lot about a fairly obscure breed of dog, so I asked if he had owned a Finnish Spitz.  He called his dog over and told me that she was half Finnish Spitz and half shepard.  Other than color, I didn't see the resemblance right away. 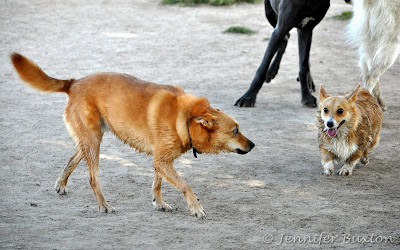 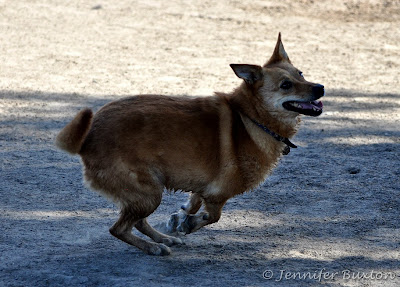 I tried to get a good picture of the two of them together, but this is the best I could manage. 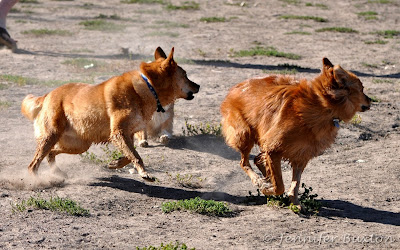 I'll never be convinced that Darcy is a purebred anything, but half Finnish Spitz?  That seems like a real possibility.  She's certainly got the barking gene!
Posted by Braymere at 10:14 PM

How fascinating! I know you can have your dog tested to see what breed they are but it costs a bit, I think around $75 via Petsmart.

I would consider doing that, but I've heard the tests aren't very accurate. I doubt she's a purebred anyway--not with that tail. When people ask I usually just say she's an orange barking dog.