About a month ago, Ryan got into an argument with his best friend.  Details are sketchy, but the end result was a trip to the ER and a diagnosis of concussion.
Yesterday, both boys were outside playing with the neighbors.  I called them in and was unpleasantly surprised to see that once again my kid was on the receiving end of a blow to the head.
Just for the record, I don't much like this trend! 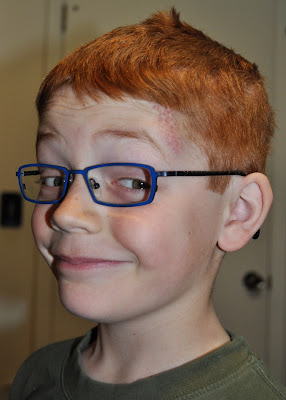 Maybe a conversation with the neighboring parents is in order? Just a request that they help curtail further violence?

Who dunnit? Memere is not pleased.

I think it was Jozsh, but I don't know exactly how it happened. As per usual, it was impossible to get anyone the full story out of the guilty parties.

Could have been Darcy, she doesn't look before she leaps. I think Maggie has a few bumps to support this theory.